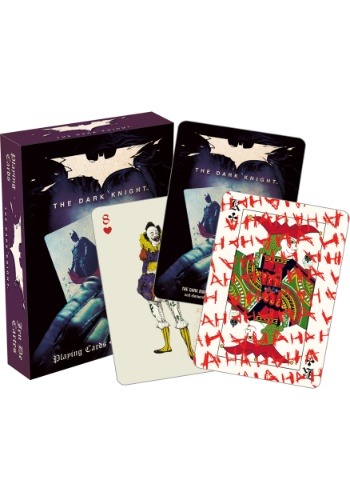 What do you think is The Joker’s favorite card game? Maybe he’s a poker player. He’s definitely impossible to read, so that has to give him a pretty good advantage. What about blackjack? He’s the kind of guy that’s bold enough to go for another hit when he’s already at 19. Maybe he’s more of a war player. After all, that game is pure chance and chaos and that seems right up his ally. Actually, we bet he’s a solitaire player. Why? Because there’s no one crazy enough to play a card game with The Joker.

Well, whatever card game is The Joker’s favorite, he probably uses these Dark Knight playing cards when he plays!

These Joker themed cards are licensed from The Dark Knight and feature clown themed images on the cards. It’s a full deck of 52 cards and some of the cards even have red letters on them, almost as if The Joker has vandalized them already. You can use them to play a game of solitaire, or as a calling card to really make Batman peeved.

These cards are a great way to add an authentic touch to any Joker cosplay outfit! Just pair them with one of our Joker costumes and you’ll be ready to really frustrate Batman.