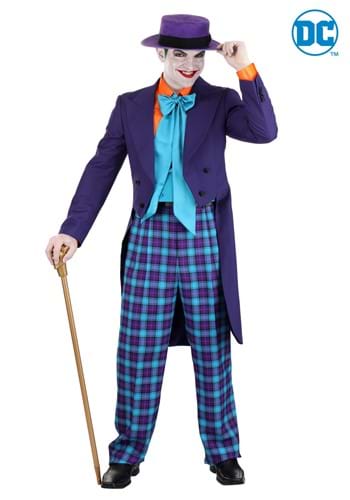 King Of The Clowns

There have been many different versions of the infamous Clown Prince of Crime that have been created over the years. Choosing a favorite can be difficult. There have been many debates over which Joker is the greatest of all times. Well, now you can easily convince all of your friends that your favorite Joker is the best Joker. Dance with the devil in the pale moonlight after you complete your Batman 1989 Joker costume with this exclusive Men's Joker Suit Overcoat.

Jack Nicholson created one of the most beloved iterations of this popular DC villain. The thing about this specific interpretation of the Joker is that he has much more class than the many other versions. Not only in his style of crime but also in his fashion sense. He's not wearing an outfit that looks like it was fished out of a dumpster. Nor is he wearing anything off of the clearance rack. Jack Napier holds himself to a higher standard than the Jokers that follow.

Look ready to play when you enter the party scene wearing this single-breasted overcoat. Designed to resemble what you see Nicholson wearing in the iconic film. It's a deep purple that stands out in a crowd. There are buttons on the front of the coat, however, they are merely for show. There are also four buttons on each sleeve of the coat located near the cuffs. This overcoat is designed with peak labels on the front. The back of the coat splits into two tails. With this much style, you'll be sure to kill it at all the costume parties this year!