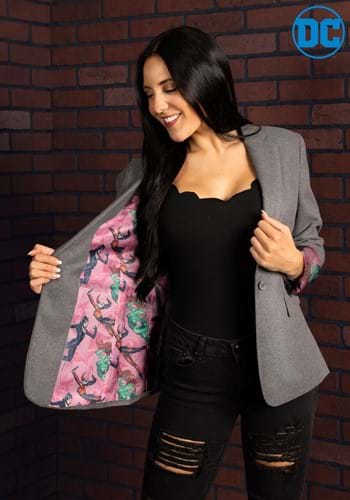 Batman has always been a master of fighting crime from the shadows. The stealth of it all surely gives him the upper hand. But we've come to realize there might be a better way. After all, despite decades of accosting Gotham's villains, they're still out there stirring up mischief. The world has even come to revere their shenanigans and love each troublemaker. At least enough to make our suggestion possible. Give Batman a hand in his caped crusade by becoming a sneaky hero and convincing a few fabulous frenemies to stick close to your side!

Show Batman you're his ally while getting Gotham's most willful gals gathered when you order this exclusive Women's Batman Blazer! The officially licensed suit jacket is shaped with a versatile heather gray polyester/rayon blend. Classic darting, a single color-coordinated button, flap pockets, and narrow lapels give the jacket a tailored look perfect for professional occasions, like meeting with the Caped Crusader on Gotham PD's roof. Meanwhile, a pink satin lining featuring flattering illustrations of Harley Quinn, Poison Ivy, and Catwoman should help persuade the trio you're their biggest fan and pal! Though, just in case having the gals literally at your side, the print's dark pink Batman "shadow" keeps the hero at a safe distance!