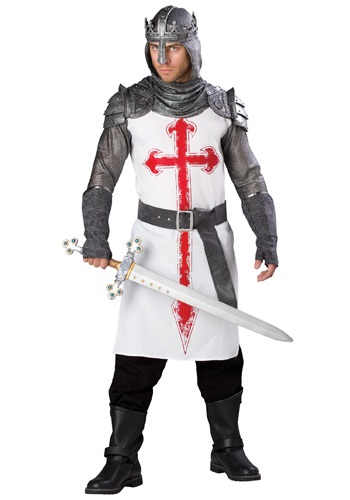 Go out this Halloween as one of the most competent combatants in all of history when you toss on one of our Men’s Crusader Knight Costumes. Not many people messed with these skilled soldiers and the few who did… well, they aren’t exactly around to tell you about their final moments, but you can bet it was as cold as the steel of a Crusader’s blade.

The most notable of the noble knights of the Crusades were those in the warrior faction known as the Knights Templar. If you want to strut around this Halloween representing these holy heavy hitters, you’ll need to make sure your skills are up to par. That means daily training. You’ll want to be able to slice your blade through enemy soldiers like a red-hot knife through butter! However before you dive too far into the training, grab this gallant outfit and see how you feel walking around on Halloween as a Crusader. If it seems to fit like a glove then we say, let the training begin!

The white poplin tunic body has metallic jersey mesh sleeves and is decorated with a large red cross printed on the front. The fingerless gloves are made up of 100 percent cotton. The vinyl shoulder pieces fasten to the tunic with Hook and Loop fastener, which is also used to fasten the vinyl helmet in the back. The metallic jersey knit mesh also makes up the balaclava-style hood as well as the belt.

Sure the Templars were supposedly disbanded back in the 1300s, but something tells us they’re still working from the shadows. After all, they collected a ton of riches. We doubt they’d just hide it somewhere without being protected! So seek them out, join their ranks, and, if you can, leave us a tiny clue as to where their treasures may lie.