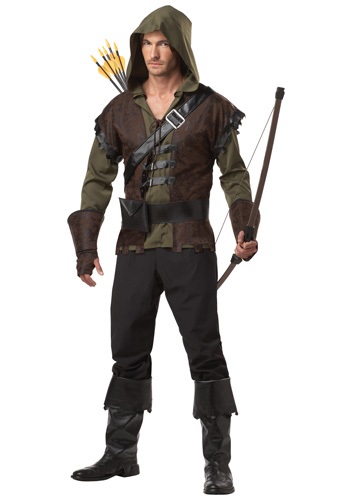 We've heard about you. You never lose a game of darts down at Nottingham’s Pub. Bullseye’s every third throw, sharking anyone who doesn’t know what they’re in for. You always tip well and sometimes donate a portion of the money you win to local charities. You’re a good guy, a legend among the regulars. You know what we think? You've got a little bit of that Robin Hood character in you. Historically, it’s believed that Robin Hood is really just an amalgamation of several people. Which works perfectly, because when you throw on this Storybook Robin Hood Costume, you can truly make the legend your own.

We know, we know. Robin Hood is famous for archery, not darts. But where are you going to find a whole archery range in Southern England? There are not too many perfectly intact forests around anymore, thanks to urban sprawl. Darts may just be the next best thing. Plus, a little more charity in the world will never be a bad thing, especially when you can be outfitted as the most famous fictional charitable rogue there is!

This great costume consists of an olive green hooded shirt and vest combo, and brown faux suede vest panels that fasten with buckled straps. Matching gauntlets have padded forearm guards (so your bow doesn’t clip your skin, as any good archer knows), while black cuffed boots complete this instantly recognizable look. Also included is a small pouch that fastens to the belt, where you can keep your game-day darts. Pick up a bow and toy arrow accessories if you really want to prove that you are, in fact, the Robin Hood. But honestly, this look is so iconic (and your aim so sharp) that there really won't be an issue.

Just keep an eye out for the Sheriff of Nottingham. He’s a grumpy fella who will never let you out of his sight, if he can help it. You’re going to have to keep all your winnings and dart sharking on the downlow, lest he come steal it all away for himself. Of course, we’re sure Little John will always back you up if a problem arises, but as a rule, we always advocate for avoiding conflicts in the first place.