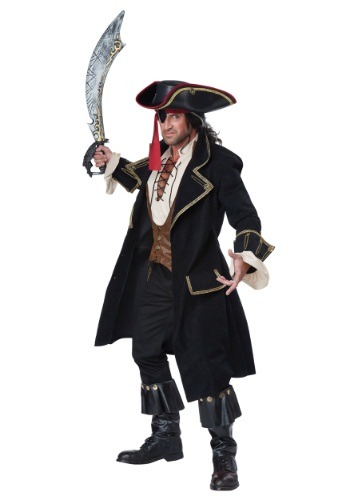 Your friend Alyssa just got named captain of her company softball team. Your buddy Eric is captain of his fiscal planning committee. And your brother Jake is an actual army captain. Feeling a bit of "captain envy?" Don't worry, buddy. We've got a captain gig for you that's cooler than all those jokers put together. And it doesn't require after-work hours, boring meetings, or enlisting.

In this Deluxe Pirate Captain Costume, you—yes you!—can be captain of your very own pirate ship and accompanying crew, with just the change of your clothes! Now, we may be slightly biased (we're kind of pirate junkies), but doesn't that sound way cooler than those other gigs? We thought so! You get to go on adventures, seek out hidden treasure, and yell at a bunch of sailors. You'll get to decide where to set your course, when to engage in battle, and when to show mercy and bring someone back from the dreaded plank. Actually, we kind of want to take this costume back now and wear it ourselves...Unhand this great garb! It's a treasure in and of itself!

Half of being in charge is looking the part, and you'll do just that in this faux suede frock-coat jacket wth vest panels. A fabric head tie ensures you look appropriately pirate-y, and the faux leather boot toppers allow you to wear whatever footwear you have on your feet right now! You even get a captain's hat (obviously), because nothing says, "I'm in charge" like a hat. Though, a toy sword wouldn't hurt either. You may want to pick one up!

We're confident you are going to thrive in your new role, and get this boat (and its ragtag crew) sailing in the right direction. As for all those other captains in your life? We're fairly certain they are currently suffering from a bad case of pirate envy!