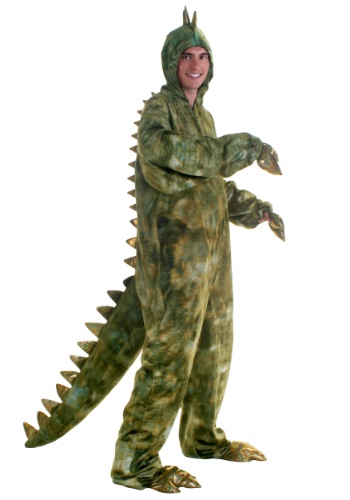 There's always that one guy in a group of friends who's... maybe not the smartest, or you might say, evolved of humankind. Listen, we're not calling him stupid, we're just saying that he may not be living up fully to evolution's design! Perhaps he relies on memes to communicate what should be nuanced thought in Facebook arguments. Perhaps he just never learned to read good. We all can't have it all! We're sure he's got plenty of redeeming qualities anyway, like a penchant for quoting Forrest Gump, or speedreading (retention, however...). Sure, the world would be better off if all of us were intelligent and thoughtful, and perhaps the health and longevity of an increasingly populated world relies on it, but that's not the world we live in yet. And we'll just have to cope.

For instance, when it came to the original squad of dinosaurs, T-Rex here was probably not the smartest, kindest, or most chill person to invite over to your dinner party. He didn’t have the brain for stimulating conversation, but you gotta think that, what the dude lacked in manners, he must have made up in personality, right?

That's why this Adult Plus Size T-Rex Dinosaur Costume is so great...made out of sculpted velour reptile-print fabric, it shows a softer side of the T-Rex. The soft green bodysuit has attached lizard-like feet and hand covers, and a big plush tail to wave around during your festivities (because what else disables fear of a ferocious meat eater better than a few choice dance move, yeah?).

T-Rex must have had something going on besides that pea brain and little arms, right? Maybe he was really good at jokes, or used his muscles to turn out a few cool party tricks, or maybe he was one of those guys who was really good at making fun of himself so as to put everyone around him at ease! Because hello…you don’t become the king of the Cetaceious period unless you know how to work with what you got, right? So go ahead...slip on this T-Rex costume and show everyone that there's more to being your favorite dinosaur than having the logic reasoning and future planning skills that would have likely saved them from total extinction!