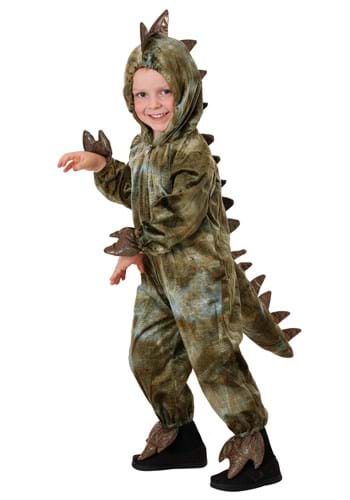 Does your little one stomp around the house roaring? Do they create small towns and armies of toys only to smash them with their giant feet? Do they want big claws, pointy teeth, and a mighty tail? Well then, it's official. Your kid wants to be a dinosaur.

And probably not just any dino will do. No stegosaurus or brontosaurus will be good enough. That's right. They'll want to be one of the biggest, fiercest dinosaurs there is: the Tyrannosaurus Rex. Which, if we may be so bold as to say, is an excellent choice. Of course they'd want to be a T-Rex. Who wouldn't want to be a T-Rex if given the option? That giant set of chompers, a tail to level trees, and a roar that sends chills down spines? Yes, a T-Rex is a good choice.

Of course, growing 18 feet taller, bursting into scales, and growing a bunch of extra pointy teeth isn't exactly a simple feat. Especially if your little one wants to be a T-Rex anytime soon. So we've got an alternative for you. Our Kids Dinosaur Costume should work beautifully. It's a front-zipped jumpsuit made of 100% polyester. It's got a reptilian print, elastic for the wrists and ankles, and a stuffed tail with spikes. There's even a hood to pull up so your little one can be the fiercest dino this side of the playground. Now, tell them to get working on that roar and stalking across the backyard. Being king of the dinosaurs requires practice, after all.