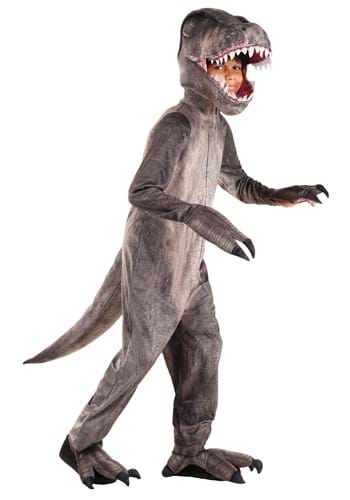 All the Dinosaurs Feared The T-Rex

Aww, man! Brussell sprouts for the third night in a row! We wish we could turn into dinosaurs. We'd swell up to twelve feet tall and almost forty feet long, and sprout teeth the size of a school ruler. Taloned feet would crush small potholes in the earth wherever we roamed. Our mighty roar would be heard from one end of the cul de sac to the other! We'd terrorize the smaller dinosaurs and never, ever have to eat green veggies again. Of course, dinos never get to eat ice cream, either, because they went extinct well before Ben and Jerry's. Hmm. Maybe we could be dinosaurs only until it's time for dessert!

Transform into the greatest predator of all time when you wear this exclusive T-Rex Dinosaur Costume for Kids! The jumpsuit-style outfit zips up the front for easy dressing and is made of super-soft minky gray fabric that is much, much more comfortable than an actual T-Rex's hard reptilian scales. The stuffed foot covers end in faux claws and secure under your feet or street shoes with elastic bands. Matching clawed mitts are sewn to each sleeve cuff, and flip back to expose your human hands whenever you need to get a better grip on something - like that ice cream cone. The headpiece fastens at the back of your head and features eye and nose detail as well as fabric fangs.

Stomp through the Late Cretaceous Period (or the neighborhood) in the best dino costume that anyone has ever seen! Does the T-Rex like Halloween candy? It's time to find out!