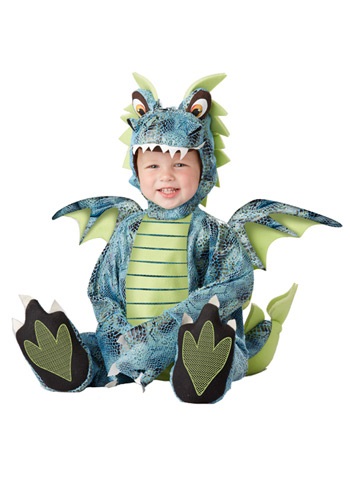 THE CUTEST DRAGON YOU'VE EVER SEEN

This costume will turn your little toddler into the cutest dragon the world has ever seen! But if you think about it, a cute dragon would be the most dangerous kind. Everyone knows to be afraid of the mean looking ones. You see the dragons with a snarl on their face and jagged bloody claws and teeth, and you know that you had better start running in the other direction.

But when you see a cute little dragon, you might think quite the opposite! You'd think "Awhh, how cute are you little dragon? Look at those pretty blue eyes, aren't you swe-" And just like that, the little dragon snatches you up and has you for lunch. This dragon's cuteness would be his greatest asset! Looks can be deceiving, so just remember that even the cutest dragons are still dangerous!

This dragon costume comes in the form of a cozy little jumpsuit! It is decorated with dragon-like printed scales and even has a tail on the back! Their hands and feet will be tucked into little mitts and booties that are made to look like a dragon's fierce yet cute talons. The wings they'll be wearing hold their shape thanks to some wiring inside of them, and they fasten to the back of the costume with Hook and Loop fastener. Last but not least they'll be wearing a hood that comes complete with soft spikes, ears, and eyes, turning their head into that of a dangerously friendly looking dragon.

Dragons are some of the coolest creatures out there that we are glad don't actually exist. As fun as it would be to see one in real life, it wouldn't be cool to not exist at the top of the food chain. So, as it is, we are perfectly content to say that your toddler is the only dragon we want to see out and about. Have fun!