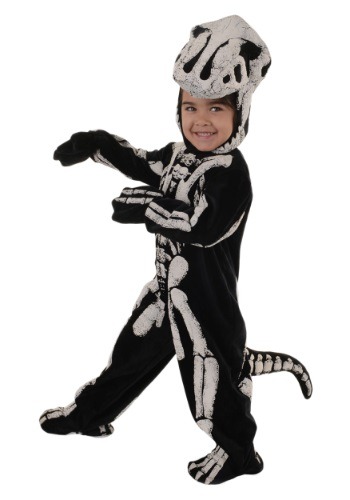 This costume is a blending of two of our favorite costumes. On one hand, you have skeletons. They are a Halloween classic, an iconic look that anyone and everyone can appreciate. They are as simple as they are spooky, and we love them for it! And then you have the dinosaur. Dinosaurs are cool, everyone knows that; it's not even up for debate! They are these giant ancient creatures that would rule the planet if they were around today! And when you take these two things and put them together, you get the costume you see before you. It really is a masterpiece.

This costume is perfect for any kid that loves dinosaurs! It's the first step on their way to an archeology career! Now they can dress up as their favorite fossil AND scare their friends. As far as we are concerned, that sounds like a pretty good night!

This costume comes in the form of a jumpsuit. The jumpsuit is black and has detailing around the entire body that makes it look as though it is a dinosaur's skeleton! The jumpsuit even has a long tail on the back and attached boot covers at the feet. For their hands, we have included mitts, and for their head, we have included the hood! The hood is designed to look just like a T-rex, and is sure to give people quite a fright! This prehistoric costume will never go out of style.

If your toddler is dressed up as a dinosaur skeleton, then it stands to reason that you might be an archaeologist? That would make for one awesome group costume! You could even play hide and seek and pretend to be an archaeologist out on an expedition looking for a young T-rex fossil. Have fun!