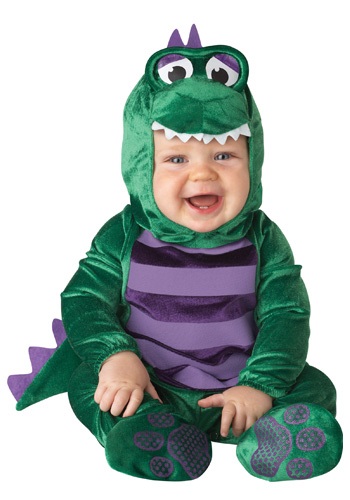 Dinosaurs: extinct, green, scaly, and totally terrifying! And if movies about dinosaurs have taught us anything, it’s that the scariest thing about them is that they’re completely silent until they’re right in your face, roaring so loud that you become totally paralyzed with fear. Well, to us that sort of sounds like what a tiny infant can do as well. They crawl around, silently, until all of a sudden—they’re screaming so loud it sounds like the house is coming down! So we figure, why not put the two together and make this adorable Tiny Dino Infant Costume!

Now it makes sense how your little one can be so quiet and then so destructive—they’re actually part T-rex! But don’t worry, you won’t even realize how much stuff you’re cleaning up because they’ll be so cute in this getup that you’ll be smiling the entire time.

This green, velvety jumpsuit fits comfortably and secures at the back. The jumpsuit features detailed purple stripes on the tummy. Your little one will love the fluffy texture and the dinosaur hood that features felt-like spikes and teeth. And you’ll love the skid resistant booties that are shaped like dinosaur paws. It’s the perfect infant dinosaur look for your roaring little one. Just make sure that this costume doesn’t amplify their ability to scream! You don’t want them to actually be able to shatter glass.

What Does a Baby Dinosaur Eat?

We’re not sure about a T-rex, but your kiddo should probably stick with baby food for now. We don’t think they’ll have much of an appetite yet for meat or, even more difficult to find—other dinosaurs! But enjoy watching your little one crawl around in this adorable costume. We promise you won’t even realize they’re roaring when they’re wearing it.