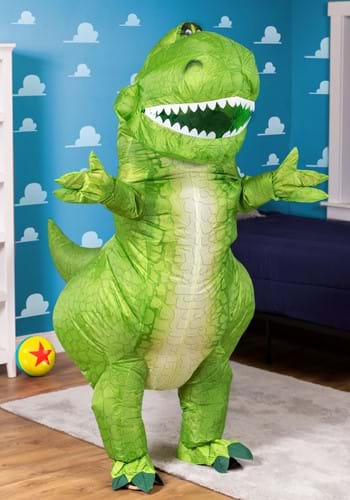 Rex isn't quite like your typical dinosaur. Toy Story's tyrant lizard is much more like a buddy puppy. That's partly due to his social anxiety (which is totally relatable these days). It is a little bit because of his ambition to be the best friend anyone has ever had. But, it really has a lot to do with the fact that he's about 5% the height of his extinct relatives, who are usually 15-20 feet tall compared to his 10-inch size... give or take a stretch. Also, the dinosaurs of old probably would have tried to eat humans for dinner, rather than make the attempt to be a friend.

Fortunately, Rex has learned how to take a deep breath and manage to get all that anxiety under wraps. When prepared, this guy can accomplish things that no other toy could even hope to try. Bashing through obstacles? No problem! Letting out a ferocious roar to terrify weirdo toys? Well... he's not bad at that kind of thing. But, maybe with an even bigger breath, our little Rex can rise to the occasion.

Come to think of it, you can really help Rex get there with this Inflatable Rex costume! This officially licensed look features an oversized green jumpsuit decorated to look just like our favorite toy T-Rex. It has three-fingered gloves with elastic wrists and a transparent spot in his mouth so you can still look around at your friends. The included fan uses AA batteries to quickly expand the costume into a Rex that is finally as big as his heart!

When Rex is finally standing bigger than he could have ever imagined, you can only imagine how mighty that Rex roar is going to be! Just remember that your other toy buddies might have sensitive ears. (Not everyone can remove them like Mr. Potatohead!)

Questions & Answers
Q: Who is the manufacturer of this costume? (1 Answer)
Asked by Anonymous | October 29, 2022