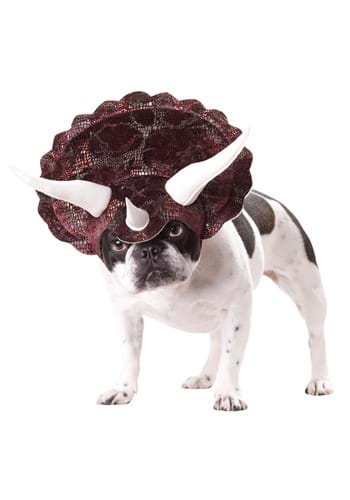 You Thought They Were Extinct

The mighty dinosaur still roams the world! Once thought to be gone forever, existing only as fossils buried in streambeds and glaciers and excavated with care by archaologists, it turns out that a few of these incredible beasts have survived till modern times. You have to know where to look, but if you're extra patient, you will spot one charging across the plains. Its fearsome horns are held high, its giant frilled head is as strong as a battering ram, and its mouth bellows for treats as it barrels into the kitchen...oh look. It turns out that the mighty triceratops is only a few feet tall. Stop laughing! You will offend the mighty triceratops!

Your pet will feel extra powerful in this Triceratops Dog Costume! The headpiece is made of soft polyester printed with shimmery metallic faux snakeskin. It fastens comfortably under your fur baby's chin. The triceratop's impressive frilled ruff stands up behind your dog's head thanks to the inner stuffing, and the headpiece also includes the dino's famous three horns on the sides of the head and on the snout.

Who's a Good Dino?

If you've ever thought that your pup's attitude was bigger than his body, then this hilarious costume is perfect for him! Your dog will look awe-inspiring and you'll get a kick out of seeing him roam his territory and beg for treats as a mighty dino. All other animals, beware! The alpha being is in the building!