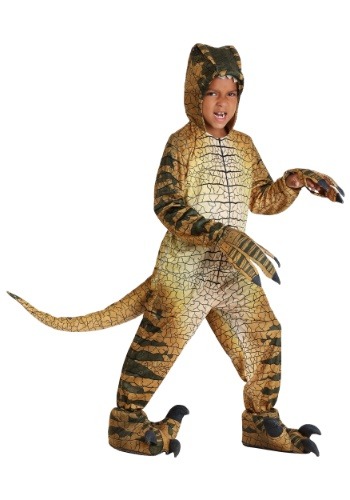 If You're a Velociraptor and You Know It

The T-Rex wasn't so great. His name might mean king, but he was a real bird-brain sometimes. He was too big to be stealthy, so sometimes his prey could outrun him when they saw him coming. He needed a whole lot of food to feel full instead of just eating normal-sized portions. And he had very short arms. We mean VERY short. If he was happy and he knew it, he couldn't clap his hands. You can forget about signalling for a touchdown! But a Velociraptor was a different matter entirely. He was smaller and stealthier: an amazing hunter. He ate birds and rodents and smaller dinos, and if he was happy, he could probably clap about it.

Roam Pangaea as the most feared scavenger on two legs in this exclusively designed Velociraptor Kids Costume! The polyester jumpsuit zips up the front so that dressing is a snap when you're in a hurry to go hunt the jungle. Its brown, green, and tan fabric is patterned all over to look like dinosaur scales. The attached mitts have long fingers perfect for nibbling on a smaller animal or two, and the attached foot covers have curved fabric toe claws. A fiber-stuffed tail swishes impressively from where its sewn to the jumpsuit's seat. The attached hood pulls up over the head and features eye and fang details.

If you wish you lived when dinosaurs existed, your wish has been granted! Hunt for treats this Halloween in your very own velociraptor outfit.