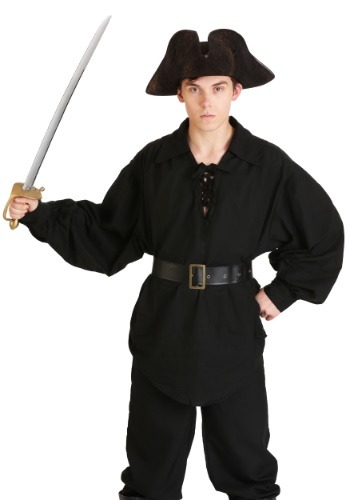 Pirates get a bad reputation. We mean, sure, it’s probably from all the pillaging and looting, the taking over of merchant vessels and the robbing of port cities and forts. Yes, maybe some of the negative reputation is earned legitimately. But they can’t all be horrible, awful, dread pirates can they? Surely, there’s at least one or two good ones. At the least, there’s one that just pretends to be terrible, right? Well, we can’t say yes or no, definitively, to that question…but we can say that you can throw on this Ruffled Black Pirate Shirt and be a good guy pirate!

In this class styled shirt, you can be the one decent pirate out there. Yes, you’ll probably totally still rob British sailing vessels or French traders (but let’s face it, they probably had it coming), but you can at least go out of your way not to hurt anyone, or rob anyone who’s not already rich!

And in this shirt, you won’t have trouble pretending to be a dread pirate, while secretly being a pretty decent one. People will think you’re fearsome until they meet you. And that’s because this shirt, with its cuffed, large billowy sleeves and laced placket will give you a reputation that precedes you. The included faux leather belt has a gold-tone buckle and can be adjusted to fit a frightening pirate sword, should you decide to accessorize with one. Maybe also consider picking up a black face mask to hide your identity. No matter what you do, you’ll be feared, up until you show everyone that you are the singular nice pirate in the seven seas!

Keep That Reputation Up

Our only suggestion is to make sure that after you meet people, get them to spread the word about how fearsome you are. That way, everyone will still think you’re terrifying, without you having to do anything too terrible at all!