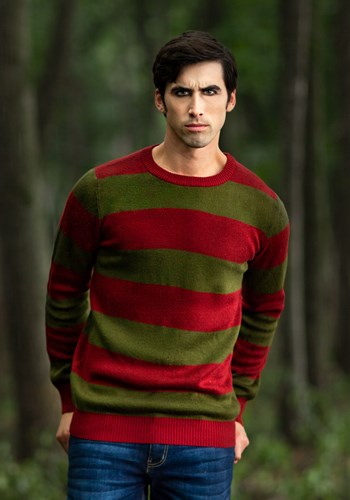 Smoke Gets In Your Eyes

It's hard not to get misty-eyed when we're thinking about what we've been through with Freddy Kreuger. And no, we don't think it's just our seasonal allergies talking. Freddy has been around, crushing dreams and taking names for more than thirty years now. That's a lot of one-liners! And while it's hard to pin down what we love about the Nightmare on Elm Street franchise most, all we know is that the concept of a killer showing up in our REM cycle to rip us to shreds has been dogging us for so long that we really don't know how to go without it. This movie has influenced countless horror movies, comedies, and actual nightmares which means honoring this uncaring monster is rather understandable!

You'll represent The Nightmare on Elm Street series right when you rock this Made by Us sweater. The knit texture is high-quality and can become a part of your day-to-day wardrobe. The stripes are instantly recognizable by horror fans so that heading from work straight to a costume party in October is a breeze. Simply pop on a fedora and a Freddy glove and you'll be one of the classics. If this sweater doesn't get you fired up for this most frightful of seasons, we don't know what will!