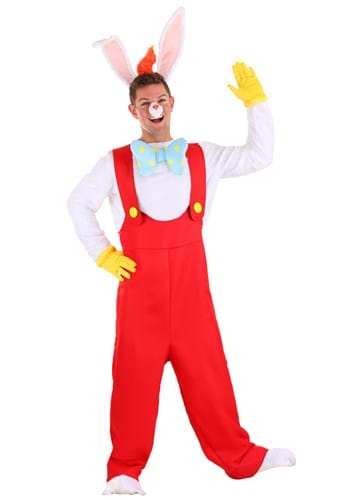 Up on the Marquee

The vast majority of cartoon characters who manage to make it big have to go through years of grueling practice, pesky networking seminars, and hard work before they finally get their name in lights. But, sometimes all it takes to see you listed on the marquee is being at the right place at the right time, and wearing the perfect outfit, like our Roger Rabbit costume! Just try it on and prepare to get launched into cartoon stardom!

Any old bunny costume probably won't start you a new life as a cartoon superstar like Roger Rabbit, but it could give you a whole new outlook on the world while you're wearing it. As everyone you pass by sees you as a cartoon character, you'll start seeing more of them as cartoons, as well. They'll start walking in funny ways, and making really “animated” gestures. The longer you have this getup on, the more everything else will start appearing like a cartoon, too. Animals may start walking on two legs and wearing clothes, and if you try to pet them, don't be surprised if they politely ask you to stop. It starts getting really interesting though when stuff like your furniture starts talking, since you never know how it's going to react to you sitting on it...

All of this would be happening in your imagination, of course, since we didn't actually make this costume with any perception-altering abilities. We just designed it to make you look like the giant walking, talking, overall wearing cartoon bunny, which it does pretty well. Included are big, stuffed gloves, foam-backed foot covers, and an ear headband to wrap it all together. Snaag it and you'll look so much like the iconic joke-spouting bunny rabbit, you might make it to the Big Time, after all! Best of all, it's officially licensed, so your stardom journey already has that stamp of approval.