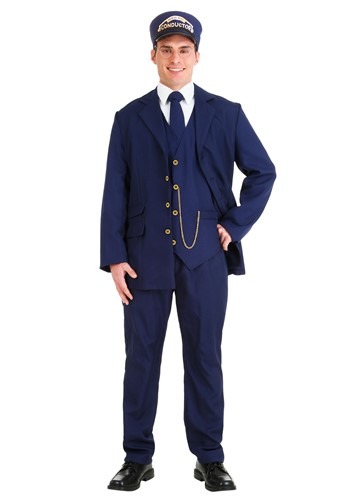 It is finally time to make the glorious trek into the far Arctic wilderness and discover the rarest location and unmask the identity of the world's most mysterious and magically-inclined man in red. Yes, we're talking about an expedition to the North Pole! The mission may be difficult. Obviously, with all the icy winds and fields of frost, a plane cannot get us deep enough and walking there is guaranteed to give you soggy boots; nobody wants that.

That means we're taking a different route, one with an air of refinement that is appropriate for our adventure. The train is the only way! Unfortunately, we'll be in need of a conductor who knows what's going on so we can ensure that we all get there safely and quickly. We know that you are just the person for the job. So, get ready to set out on a mission of a lifetime to go to a place where no one has ever gone before!

Naturally, we don't expect you to dive into the cold unprepared. That is where this North Pole Train Conductor costume comes into play. This is a Made by Us costume crafted by our own in-house team of adventurous designers. It includes a professional blue jacket and a matching vest front with a gold chain and buttons. The pants, necktie, and 'Conductor' hat complete the uniform and might even have folks ready to let you travel via train to less blistering locales!

WHERE NO ONE HAS GONE?

Alright, so the truth is that the Arctic is actually quite populated and, obviously, a train conductor would just be following a railway so, obviously, folks would have gotten to the North Pole before. But, still, the chance to find the big guy in red has to count for something and we know you'll love this Train Conductor costume either way.