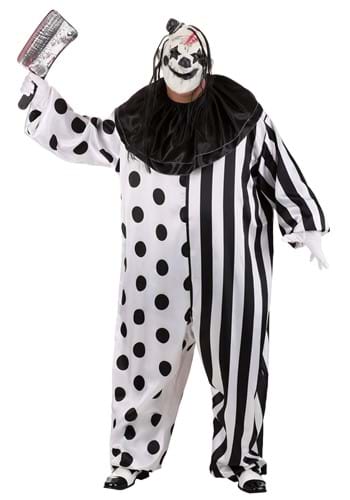 A Bone To Pick

Once upon a time, you were the only clown in town. A couple times a year, you’d suit up in your outfit, step off that gentle front porch, and give some people a good scare. And then you retired, thinking that you had a pretty good legacy as the scary clown of the neighborhood—it’s an obscure thing to be remembered for, but it was your legacy, and that’s what mattered. But now all of a sudden, there’s a book about a clown, and a creepy movie about that book, and a reboot of that movie, and maybe a sequel. And there’s creepy clowns in TV shows and real clowns creeping on city streets and it’s all just...not being done the right way. So, it seems you'll have to suit up again in this newfangled Killer Clown Plus Size Costume and show them all how it’s really done.

The only trick is, this time, your target is to scare away these knockoff clowns...oh, you need to show them how a real scarin' goes down in Clownville!

And in this outfit, no clown, monster, or creature, stands a chance of acting brave in front of you. The terrifying ensemble consists of a jumpsuit that stretches from the neck all the way to the wrists and ankles. Half of the jumpsuit is striped, while the other half is disconcertingly polka-dotted. Something about the non-matching patterns is really freaky to everyone. A wide-ruffled satin collar ties around the neck, and the fully-molded latex mask features an attached hat and thin strands of synthetic hair. All in all, it adds up to one bone-chilling appearance.

Now you can bring down those clowns and school them on the art of spook. Of course, you’ll be so successful at it, they’ll never even try to follow in your footsteps again. Once again, your legacy will be secure. Great work!