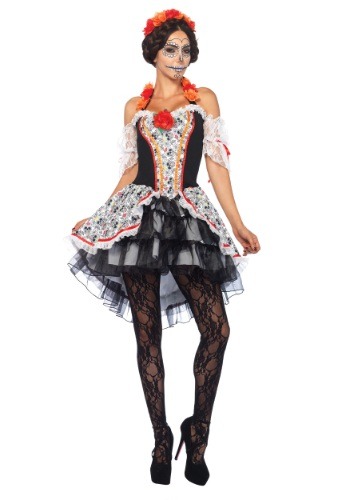 Can we just take a second to appreciate skulls? See, skulls are universal. Everyone has one. They look relatively the same. It's something we all share and can relate to. But also, skulls are bones, which are kind of creepy, which make them kind of cool. Better yet, skulls can be used in art, to reflect on mortality (looking at you Hamlet), and even to learn. But best of all? Skulls can be dressed up and dressed down. That's right. We're talking decor.

Because, let's face it, skull decor is like the best. It's a little creepy, a little somber, and, if you live in South America, they can be festive as well. We're of course talking Dia de Muertos and the delightful Calaveras, or sugar skulls. For the Day of the Dead, skulls are decorated and used as treats and offerings. They're covered in bright colors and patterns and, as far as we're concerned, are the coolest of skulls.

So it should come to no surprise then, that we have a costume inspired by these fabulous beauties. Our Sugar Skull Senorita Costume comes with a tutu style dress with halter neckline, zipper up the back, and off-the-shoulder white lace sleeves. The skirt has an asymmetric hemline that's longer in the back, and it has tiers of sheer organza ruffles with a print overlay, and it's edged with ribbon and lace. The costume also comes with a headband made of elastic with fabric roses sewn to it. Just add some ornate sugar skull makeup, and you'll be nearly as colorful as a sugar skull itself.

You know what would make this even better? Some actual sugar skulls. We're talking about the ones that are solid sugar and made to be eaten, of course. How awesome is that?