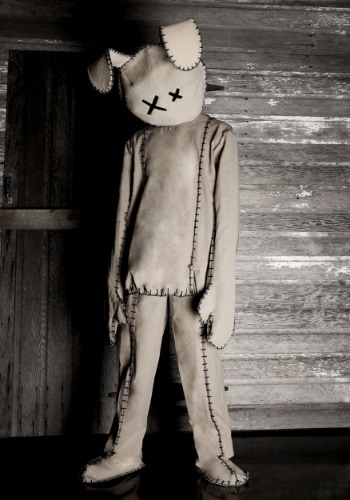 WHAT HAPPENS WHEN YOU CROSS A RABBIT WITH A VOODOO DOLL

Well, let's face it, any time that you decide to cross anything with voodoo, you're probably talking about a mistake in the making.  But, when little Suzie lost her favorite stuffed bunny, what else could be done?  Who could resist trying to help that sad little face and restore some peace in the world.  Now, you'd think that a quick run to the toy store or even some loving moments with cloth and thread might have fixed the problem.  But, not when there is dark magic available!

So, it seems that instilling animation into the lifeless and forlorn is the way to go!  We have no idea what outcomes this is going to bring, but when we saw the graveyard practically rise up from the force of bringing this little critter doll into the world, we knew that little Suzie was never going to be the same! Who knew that there was a stuffed animal cemetery, anyway!?

Put the stuffing back into Mr. Bunny when you slip right in this Lifeless Bunny Adult Costume.  This exclusive costume is going to redefine the thin line between adorable and creepy thanks to the tunic style top and matching pants that feature distressed looks and all-over decorative stitching.  The stuffed headpiece transforms you into the sullen bunny with stitching for eyes.  (Mesh covered eye openings offer some visibility, but only as much as you'd expect a lifeless bunny to really have.)  At least the wire frame ears can be positioned however you like, so the bunny can ear everything perfectly.  (That'... just great.)

TIME TO ADD ANOTHER THING TO THE CREEPY LIST

We had gotten over the fact that clowns could never again be something simply joyful and were slowly coming around to the idea that dolls were generally problematic.  But, now that this little guy is in the world, we can recognize that bunnies are, also, capable of being truly creepy as heck!