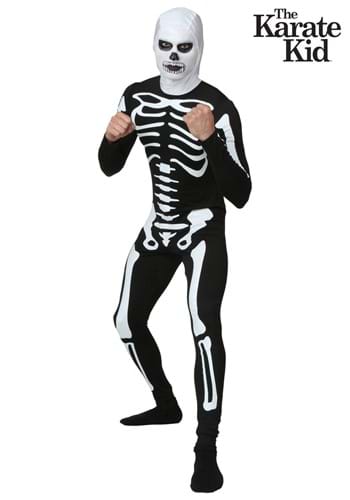 Ah, the 80s. It feels like yesterday in some ways, but it was a simpler time. Halloween costumes didn’t have to be licensed. Sure, Superman, Darth Vader, and various presidents were surefire hits whether you were going to a costume party or holding up a convenience store, but you could still go as a bed sheet ghost without it being a throwback. The Cobra Kai usually wear dope black gis adorned with their yellow coiled cobra logo, but even villainous martial arts students have to let loose sometimes.

So they chose skeletons, the most intimidating of all generic monsters to get in a fight with. I mean, never mind that it seems like if you kicked a skeleton it’d shatter apart. How is it even moving?! You’re so scared, you’re not concentrating on its weak points, and before you know it, you’re face first in the dust. Let’s see a Frankenstein or a Dracula do that. They’re so busy moaning or prattling on about what they want to do with your bodily fluids, any karate student worth their salt can hear them coming from a mile off. Not like Cobra Kai skeletons.

Strike first! Strike hard! Show no mercy! Learn the way of the fist, skeleton style with this officially licensed Skeleton costume from Karate Kid. If you like to make little twerps who can’t leave well enough alone pay, you might just be Cobra Kai material. This is a dark jumpsuit printed with skeletal bones and features a white hood to pull up over your head. You'll look just like the Cobra Kai students during the Halloween scene!

You get two in one costumes with this Skeletal look thanks to the clear nostalgia it'll trigger from the movie. Paint your face white and go full skeletal style or let your hood down and let your golden locks show off that Cobra Kai style instead. Undead or natural look, you've got this villainous look down!