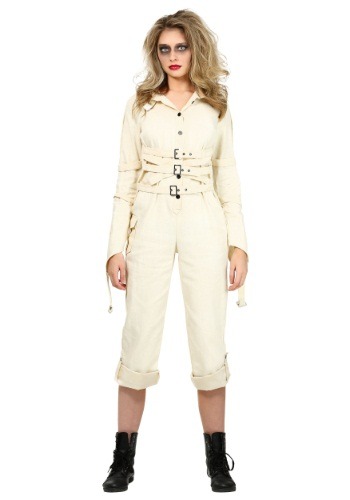 You warned them. You can't say you didn't warn them. You told them what would happen if they told you to "calm down, " one. more. time. And now? Oh, now you'll show them just how not calm you can be!

Here's the story: you and your roomies were prepping for a scary movie night. Jason claimed that slasher films were the most frightening, while Wes argued that monster movies made him jump the most. You, however, insisted that a good psychological horror can stay with you for years. They brushed off your suggestion. They didn't take you seriously. The told you to "calm down," when you argued harder for your selection. "Psychological thrillers just aren't that scary to me, "Jason asserted. So let's see how "not scary" they find it when they come home to find you in this Insane Asylum Straitjacket Women's Costume, sitting calmly on the couch, staring off into space with a maniacal look in your smoky eyes, repeating some random phase over and over, and laughing intermittently. Looks like they're the ones who need to calm down, now!

Seriously this costume is so creepy! It's a cream-colored cloth jumpsuit that fastens in the front. Each sleeve has a hanging strap with a metal buckle, and another 3 straps adorn the abdomen. The pant cuffs can be rolled and held in place. Make sure you add an unkempt hair style and take the time to really get into character before the roommates get home. For maximum creepy effect, keep the guise going long past the first time you want to laugh!

Now that you have their full attention, make sure they know just how you broke out of your "facility" and what you're doing on their couch. Make the story good! This costume is pretty creepy, but some eerie character development never hurt a haunting. Have fun!