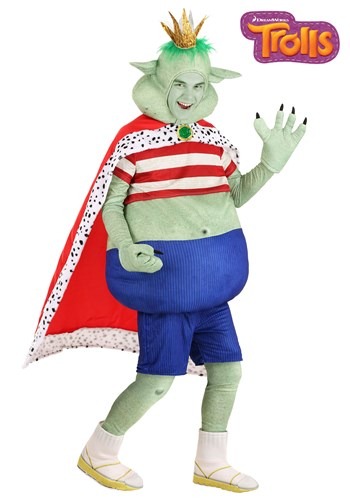 Nah. He hasn't been doing any of those things. He's been living it up, relaxing, and deciding whether or not it's a good idea to eat trolls. He might sound kind of irresponsible, but behind his spoiled nature is actually a pretty great leader. Once the trolls introduced him to the power of music, he decided to end that whole troll-eating business in his kingdom and brought a new sense of fun to the Bergen kingdom. It also helped open his eyes to the lovely Bridget!

This Trolls Prince Gristle Costume is an officially licensed costume from the Trolls movie series! It's a Made by Us costume, which means our designers took great care in crafting this look! The costume starts with a bubble-style bodysuit that comes with plenty of padding around the hips to give you Prince Gristle's princely physique. The costume also comes with a striped pullover jersey shirt that fits over the bodysuit. The leggings are designed to look like Bergen legs and they feature a pair of attached blue shorts. The cape attaches around the neck with a faux gem fastener. The gloves come with foam backing and have fake nails on the fingertips. The shoe covers fit over your shoes with elastic bands under the feet. Finally, the hood is soft-sculpted to look like Prince Gristle's face and it fits with a fastener under the chin. It even has a crown that sits on top of the hood! Put it all together and you'll be able to rule the Bergens in style!