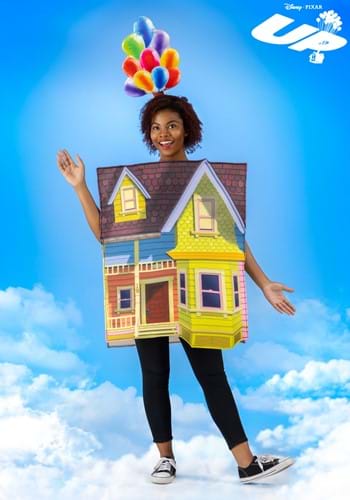 Disney and Pixar Up House Costume for Adults

When your friends started planning a group costume based on Disney and Pixar’s Up, it was a simple thing. Someone wanted to be Carl and another Russell. But the cute idea caught like a balloon in the wind and soon everyone knew the plan was floating around. Soon there was a Kevin and Dug. Even Ellie and Charles F. Muntz joined the adventure. By the time you heard about the costume, Muntz’s dogs were taking shape. And a couple of people had offered to stand in as construction workers or nursing home aides. You knew someone needed to give the idea a solid foundation, so any outsider looking in saw friends that were all part of the same club.

Be the anchor in your group costume when you order our exclusive Disney and Pixar Up House costume! The officially licensed ensemble transforms the wearer into the iconic Fredricksen home with two simple pieces. A foam-back jersey tunic forms the base of the look with a detailed print of the front and back of Carl and Ellie’s technicolor house. The tunic is held in place with a pair of shoulder pads that blend in with the printed images and two elastic straps on the otherwise open sides. To ensure the Made By Us costume looks just like the Fredricksen home a headband with a towering multicolor print of balloons is included.