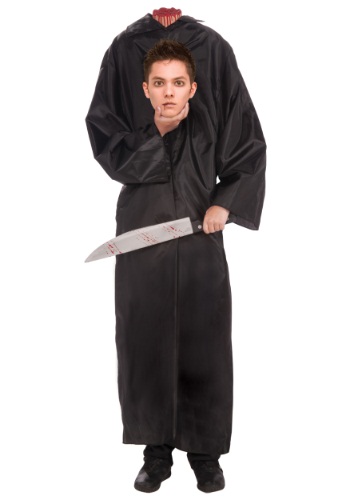 You ever wonder what happens when you can't keep a level head? Well don't worry, it's not this. This is something else entirely. This fella did not only fail to maintain a level head, he failed to maintain a head attached to his body. As you can imagine, this is considerably worse than losing your cool. So next time you feel yourself losing your cool, just remember: It could be way, way worse.

All things considered, we consider this guy fortunate. He is still alive somehow. The vast majority of us would be dead after such an incident. But for whatever reason, this guy is still kicking. We don't really understand it, but if this were real he'd be a medical marvel! He would be filthy rich, so rich that he could have his head sewn back in place. Then boom, just like that the problem is solved, and he could make a ton of money by going on daytime talk shows.

This costume will make it look like you've cut off your head! Don't worry, it will only look that way. Your head will still be firmly attached to your body! You'll be wearing a harness that makes you look much taller than you actually are. It attaches to your shoulders and makes it look like your shoulders are way above your head. Then you poke your head out through the robe, and it looks like you are holding your own head in your hands! Genius, right?

If you ever feel like you are losing your head while in costume, just remember: It's physically impossible. It's still attached to your body, the costume only makes it LOOK like your head is unattached. As long as you can remember that and keep your cool, you are going to have a lot of fun!