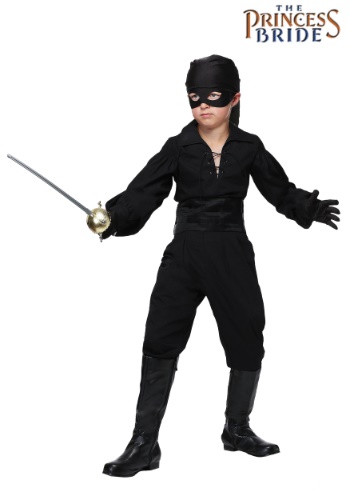 The legendary Dread Pirate Roberts has regular pirates shaking in their boots. The mere mention of the name is enough to have them cut their own sails and leap overboard in surrender rather than face the indomitable might of the most notorious pirate in any seas, known or otherwise. Of course, those who have heard the glorious tale of The Princess Bride know the secret. They know that the true Roberts retired in Patagonia years ago!

With the nom de guerre passing from protege to protege, it would finally come to Westley to become the captain of the Revenge and bring it to harbor in order to save his beloved Buttercup! But... what happens now? Would Inigo take over the role of the Dread Pirate? Were the books right in hinting that some tyke named Pierre would claim it? The Dread Pirate Pierre!? What nonsense is that!? No... it is time for your own tyke, to whom you've been telling this very story, to take up the mantle and become the Dread Pirate Kiddo! (At least until he's ready to claim the full Roberts name.)

Get ready to tell the tale that you've been curious about for over 30 years when you gear your little pirate up in this officially licensed Pirate Westley costume. This is a carefully designed replica of Westley's Dread Pirate Roberts look worn throughout most of the hit film, all sized down into tyke form! The black pants and shirt make a comfortable base. The waist sash cinches everything together! The eye mask keeps your tyke's identity a mystery... and the scarf and gloves just make for the final hint of pirate refinement, of course!

In the story, Westley is always there to make sure Buttercup's wishes come true. This look might even get the kiddo to say, "As you wish!" when you ask him about eating up those veggies and cleaning up his room, too! (Yeah... probably not. We aren't Miracle Max, here!)