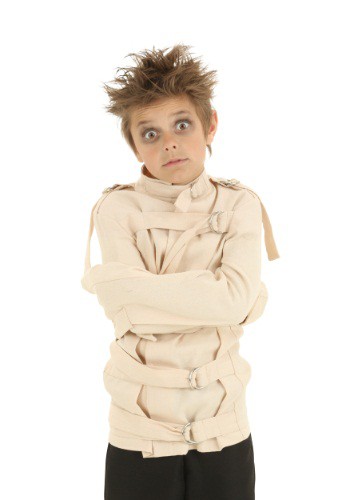 Your little guy has been obsessed with Harry Houdini lately. He’s already learned how to pick the lock on his bedroom door, wiggle his way out of (toy) handcuffs, and he can hold his breath underwater for almost two whole minutes! All of that is pretty impressive...but can he perform one of Houdini’s most famous escapes: the straightjacket? We’re not saying he has to hang upside down over a busy city street like Houdini did, but if you pick up this Boys Straight Jacket, he’ll definitely be able to practice the trick and have fun while doing it!

Honestly, your kiddo’s dedication to the craft is impressive. So this straight jacket might be the next step in his escape artist career. Just make sure there’s nothing nearby he can hurt himself on—we watched Houdini’s escape and it took a great deal of wiggling and twisting for him to get out of it, and he was a pro!

This captivating outfit will have your kid spellbound and practicing for hours on his fingerwork, hand stretch, and dexterity (all important things for successful escape artists). The sleeves wrap around the body like a real straight jacket! The shirt fastens with hook and loop strips at the center front and multiple straps that fasten with metal D-rings. It’s no easy feat to wriggle yourself out of this shirt, but once your little dude does it, he’ll practically be ready for his own travelling escape artist act! You won’t be able to stop him from hitting the road and making a name for himself, but maybe you could be his manger.

A Word of Caution

Escape artist activities are very serious about their work. Just make sure he’s practiced enough before he starts escaping from the straight jacket while hanging above a tank of sharks. Things like that can get very dangerous very quickly, so it's important to encourage him to master his skill set at an early age.