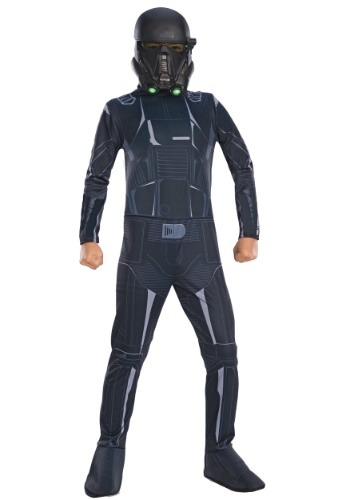 Based on the ominous soldiers from the iconic Star Wars film, this Rogue One child Death Trooper costume transforms your child into one of the most feared soldiers in the entire galaxy. It comes with a polyester jumpsuit that has printed armor on the front and back. It also comes with an imposing mask that has a look that’s fierce enough to put the fear into a Jedi Master himself. It has mesh eyeholes for vision and green accents in the front for an ominous look.

Once your child is outfitted in this official Star Wars costume, your child will be ready to take on any Rebel Scum. Even Jyn Erso and her crew of wily recruits won’t be able to stand a chance against her. Just make sure you gear your little one up with one of our blaster accessories, since you want him to be prepared for any shenanigans or treachery that the Rebel Alliance might be planning!