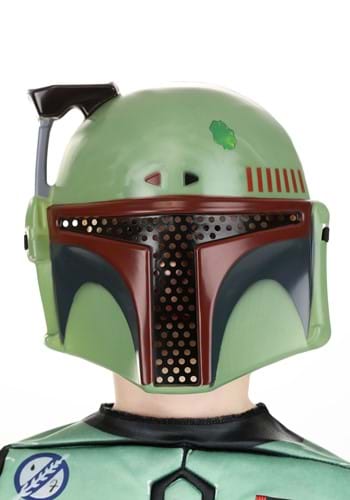 Boba Fett Half Mask for Kids

Every child has such big dreams. Some want to be the quarterback of their favorite football team. Others dream of being a cowboy. Yours is a little different... to say the least. They dream of becoming the most notorious bounty hunter in the star system. Well, obviously you want to encourage them and push them to follow their dreams. So we'd like to help you out. This Halloween, give them their first piece of Baskar armor when you grab this Kid's Boba Fett Half Mask.

Boba Fett is the greatest bounty hunter in the entire galaxy. It only makes sense that this Star Wars icon is your child's role model. Complete their Halloween costume with this half mask and let your kiddo begin their bounty hunter training. Trick-or-treating is a lot like hunting down bounties. However, instead of going after wanted criminals, they'll be tracking down candy. And instead of getting paid in credits, they get paid in, again, candy. So basically the same thing!

Since your child is just bringing their training, this half mask will be perfect. After all, if you get them a full beskar helmet, they won't be allowed to take it off. This is the way of the Mandalorian. This molded plastic mask is painted with all the details your child will recognize from the Star Wars films and shows. Thanks to the mesh visor, your child's vision and breathing won't be impaired in the slightest!