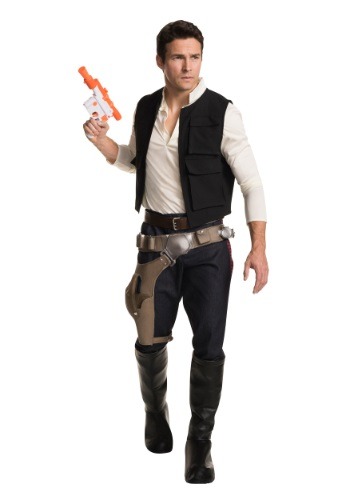 Yes, a few people will say Leia, and yes, they are legitimately correct in a lot of ways. But you know what? We’re always going to have a very soft spot in our hearts for Han Solo and his scruffy, nerf-herder ways. So pick up this Han Solo Grand Heritage Men’s Costume and embody the greatest smuggler/starship pilot the galaxy has ever seen. In this outfit, you can relax easily in a desert cantina, talking openly of your speed records, slyly eliminating the greedy minions sent to find you, just as well as escaping from an ice planet or hiding from an Imperial Star Destroyer. In fact, in this outfit, there’s no task that is too big, too small, or too dangerous. You’re Han Solo, the greatest rogue pilot in the galaxy.

So throw on this classic costume, complete with the iconic shirt, vest, and red striped pants, and feel the sudden resentment of authority seep through your pores. Don’t forget the faux leather belt and molded gun holster to complete the look. And you definitely need to make sure to pick up a Han Solo blaster accessory as well, because Han Solo is nothing if he doesn’t have his classic blaster rifle to mow down Stormtroopers that get in his way.