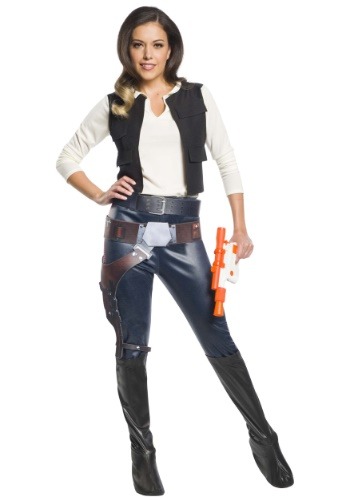 Sometimes, you just have no choice but to rebel. Take Han Solo, the smuggler from Star Wars, for instance. The Empire really gave him no other option. He’s just a regular kind of guy, trying to earn a few bucks to pay back his massive debts and they keep making tough for him! They try to blow up his friends on Hoth and they lay down traps for him in Bespin. It’s only natural that he’d take up arms with the Rebel Alliance after all of that!

You’re a bit of a rebel too, aren’t you? You’re not beholden to traditional conventions. Who cares if Han Solo was a guy in the movies? You’ve got the smooth-talking skills and the shoot first kind of attitude to be a smuggler, so why limit yourself by that? You can gender bend that role and be the best dang Han Solo the world has ever seen. You just need the right costume first.

This women’s Han Solo costume is officially licensed from the Star Wars movies. It recreates the iconic character’s outfit from A New Hope, but in a style for women. The costume comes with a white long-sleeved shirt that has an attached black vest. It also comes with a pair of pants with printed Corellian Bloodstripes down the side. Finally, the belt fits around the waist and comes with a holster for you to stash your blaster! All that’s missing from this outfit is a Wookiee best friend and the Millennium Falcon.

Time for an Alliance

You can mount your own Rebellions when you wear this Star Wars costume! Just remember than any good Rebellion can’t happen solo (pun intended), so you better gather up some of your friends and create your own group Star Wars costume.