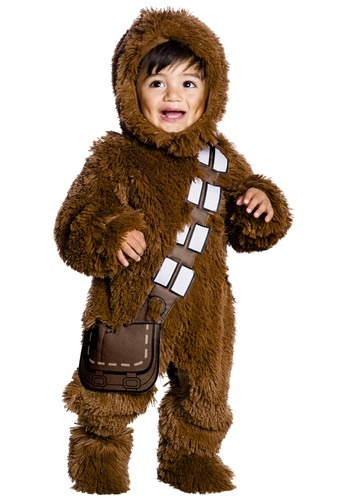 Long long ago, in a galaxy far, far away...there lived a race of creatures that were more adorable than you can imagine. They looked a little like a cross between a long-furred spaniel dog and a grizzly bear. They stood on their hind legs like humans, were incredibly smart, and had the cutest little younglings. You'd think that they'd be peaceful and cuddly, and maybe they were, sometimes - but if they got angry, they could bellow loud enough to curdle your blood and rip the thing that displeased them to bits. Kind of like your little one when he gets overtired and doesn't want to eat his dinner! Our advice, to paraphrase C-3PO is, "Let the toddler win!"

Your toddler will be the cutest little alien around in an officially licensed Star Wars Chewbacca Deluxe Plush Costume! He or she can look just like Han Solo's faithful friend and muscle man in the brown jumpsuit made of polyester faux fur. The matching pair of booties have elastic in the ankle cuffs to keep them in place even during a showdown with the Imperial Storm Troopers. A foam sash criss-crosses the torso and ends in a foam "pouch" just like Chewie's well-known gear. The headpiece is also made of faux fur and has an opening for the whole face.

Laugh It Up, Fuzzball

Your little Wookiee will get a big kick out of this cozy costume! He'll have so much fun that he might want to wear it every day.