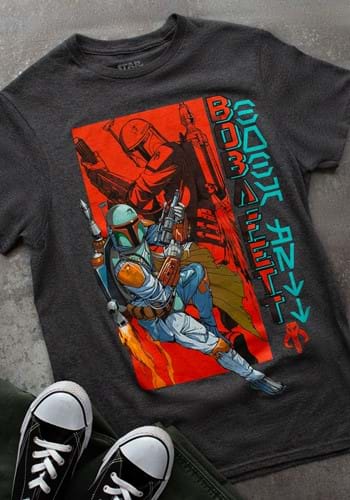 Always Bet on the Fett

Every fan of Star Wars has a favorite character from the franchise. Some love the Jedi while others prefer the Sith but you happen to be an individual that doesn’t fancy the lightsaber-wielding warriors. You're different. You admire the characters that know how to handle a blaster or two. Many stand out from the common rebels and Stormtroopers. You have characters like Han Solo, Chewbacca, Lando, and, of course, the infamous Boba Fett. If your favorite character is the greatest bounty hunter in the galaxy then we have just what you need.

Grab this Boba Fett T-Shirt and have a graphic of the acclaimed Mandalorian printed on you wherever you go. There are two images of Boba on the tee, one in full color and the other in black and red. His name is also printed vertically down the shirt in English. Alongside that, his name is printed again in the common written language seen throughout the Star Wars franchise called Aurebesh.

Don’t be a scruffy-looking nerf herder and add this awesome graphic tee to your wardrobe today. You can never have too many Star Wars shirts, especially shirts that feature the deadliest bounty hunter of all time, Boba Fett!