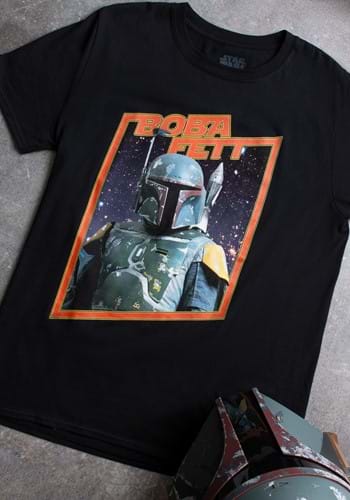 I'm a simple man making his way through the galaxy. Like my father before me. - Boba Fett

Boba Fett is one of the cooler, more mysterious side characters in the Star Wars universe. His backstory is, too! Created on the planet Kamino as the result of an arrangement between Jango Fett and Darth Tyranus, Boba Fett is an unaltered clone of Jango whose career spanned decades, from the fall of the Galactic Republic to the rise of the Galactic Empire. As a burgeoning bounty hunter, he worked alongside other mercenaries like Bossk, Dengar, and Asajj Ventress. What a legend! We certainly don't agree with his assessment of himself as a "simple man."

You can rep the baddest of galactic bounty hunters Men's Boba Fett T-Shirt. It's completely cotton and features a printed image of Boba Fett on the front, so you'll be simultaneously feared and admired everywhere you go! Best of all, this bad boy is officially licensed, so you can worry less about the stitching of the sleeves and the quality of that vibrant print and worry more about catching up on all those bounties! We wouldn't mess with you if we saw you sporting this shirt, but we'd want you on our good side, too.