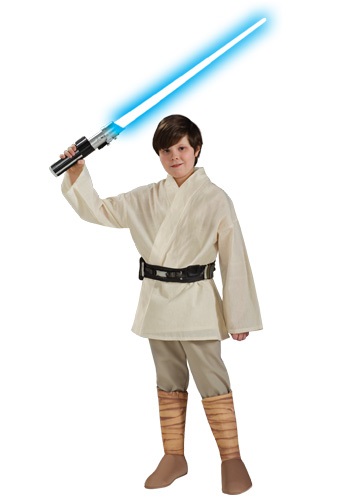 So, the next time your little one wants to go down to the Toshii Station to pick up some power converters, or bullseye some womprats in his T-16, you’ll know exactly which young Jedi he is invoking. In fact, why not just make the association official and get him this Luke Skywalker Deluxe Boys Costume? That way, he can look the part just as well as when he goes about his moisture farming duties or helps clean off the new droids you purchased from the shady Jawas earlier this morning. He’ll be super grateful to have such a stylish Tattooine oufit, and maybe he’ll then finally heed your warning to avoid any Tusken Raiders as well as Old Man Kenobi, who lives way out in the desert.

This classic Luke Skywalker look, officially licensed and modeled from A New Hope, is perfect for any young moisture farmer who dreams of escaping a desert planet with no real prospects on it. The canvas tunic and brown utility belt, along with light colored pants resemble Luke’s original costume from the movie, before his big escape with Obi-Wan! Just make sure to pick up a lightsaber accessory to complete the look.