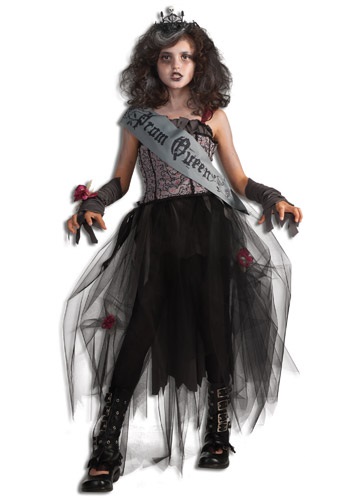 A goth prom queen is a Halloween dream! Instead of brightly colored balloons and streamers decorating the halls, you could have gray and black balloons, maybe some chains! Rather than today's greatest hits playing, we can play some 2000's punk rock. Anyone who identifies as goth will have a great time at this party. Everyone would have a great time actually. Even the people that aren't goth might end up being goth now!

How would you decorate your goth prom? That's up to you to decide when you become the goth prom queen! Whatever you choose, we hope it's dark and cold. We will love it! This won't be your average TV show prom, this will be a one of a kind wonder! Setting a new standard for proms everywhere. We think this trend will catch on pretty quick!

This costume is elegant, yet dark. Perfect for any goth queens! They'll be wearing a black dress with a tulle skirt and fake skulls printed on it. They'll be wearing tattered glovelettes and a wrist corsage that match the dress and style perfectly. And of course, we had to include a tiara and sash. The sash says "prom queen" leaving no confusion as to who you are, and the tiara, well, what is a queen without a crown. These finishing touches are like the cherries on top of this gothic sundae. All you will need now are some leather boots and some screamo tunes and your costume will be complete.

When you become prom queen, what will you do? You're the coolest gal in school, what's your first step? Whether you like it or not, we think your first step will be spreading the goth trend. You won't be able to help it; when people see you dress in all black, they are going to follow suit!