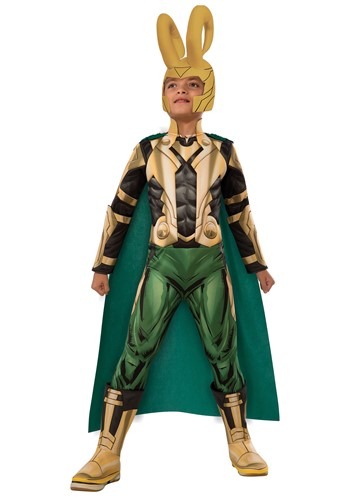 Now, we admit that the Marvel Universe isn’t always a perfect replication of our own.  Occasionally, we see a few folks running around there that resemble people from our own world with just too many differences such that we no longer really even recognize them.  And, that’s the nature of the whole multiple worlds theory.  But, the occasion when one shows up and we just know that there is a solid relationship… well, that’s a special moment.  So, we’ve got to ask.  Your kiddo… trickster?  Enjoys some practical jokes now and then?  Illusions and deceit?  Do they seem to have some ambitions maybe just a bit bigger than their britches?

Well, if so, you might be looking at our mortal incarnation of the Asgardian God of Trickery, Loki, himself.  Now, that might seem like a bad thing.  After all, he was rather… well… evil throughout most of the recent stories told by Marvel.  But, he’s definitely got some heroic qualities and who can argue with that sense of fashion and drama!?  You can bring the might of Loki to life and see what it is like to, by technically, be the All-Parents, too!  After all, if your kiddo is Loki, well… what does that make you!?

Find out with this astounding Child Deluxe Loki Costume.  The jumpsuit fastens with the mysterious ancient power of Hook and Loop fastener and has soft-sculpted fiberfill padding to give those shoulders a bit more definition than might have previously been there.  You don’t want your kiddo looking like a puny god, after all!  The cape fastens to the shoulders and the foam hood has stuffed horns to give your little Loki that regal look that they need.  All you might need now is a nice eye patch for your All-Father Odin-ness and possibly a matching gear set for your little Thor!