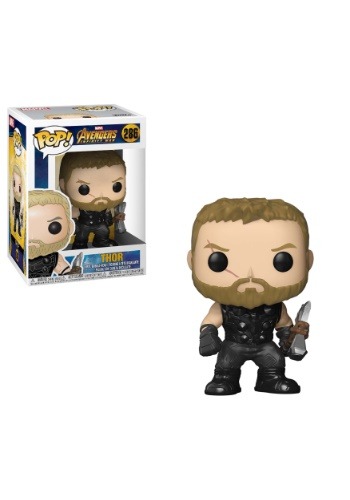 Whoa! Check out Thor’s new digs in Avengers: Infinity War. He’s scrapped that flashy blue and silver number with the cape for a sleek and stylish black number. Maybe the Black Widow has been helping him out with his style lately? Well, we are loving the new look, along with that new weapon he’s packing, Stormbreaker (hopefully Beta Ray Bill isn’t too angry at him for borrowing it). The fine folks at Funko have taken notice of Thor’s awesome new look and they went ahead and made a POP! vinyl of him!

Now you can add Thor in his new outfit to your collection. This Avengers POP! Thor figure brings you the mighty superhero in all his glory. The figure has his brand new black outfit from the Infinity War movie, along with his new weapon in hand. He has a scar on his face and his new short hairstyle. It all combines for one dashing little figure to add to your collection!

Hanging With The Avengers

This little figure is ready to battle against Thanos and his forces, but he’s also pretty content just hanging out with the rest of your Funko POP! figures. (He’s quite the jovial little vinyl.)