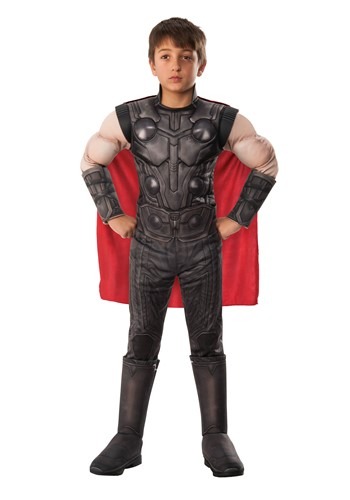 The Avengers have been through a lot. They saved the world from aliens in their first movie, then saved the world from a crazy robot in their second movie. Then they fought each other in Civil War (which is kind of their own fault, but we won't hold it against them; families argue sometimes). Then, they had to fight a mad god who insisted that life would be more prosperous if half of Earth's population blipped away. If that wasn't enough, they had to travel back in time to try and save half of Earth's population! That is quite a workload, even for super-powered heroes with endless bravery. As much as a powerhouse Earth's mightiest heroes are, they would be severely inhibited if they didn't have The Mighty Thor on their team (thank the gods).

Speaking of Thor, we have a fantastic Boys Deluxe Avengers Endgame Thor Costume that your kid will love. The movie version of this costume has to be the best iteration of Thor's outfit to date, so we did our best job getting it as close to the movie version as possible. We know kids never stop moving, even during costume changes, so we made sure the costume was easy to put on, using hook & loop fastener strips at the center back. For kids who really want to step into the boots of Thor, there are attached foam boot tops with elastic straps underfoot (a must for the perfect superhero landing). We all know kids have wild imaginations, so we know they will love the soft-sculpted fiberfill padding on the chest and shoulders, giving them that muscular look. And what is a superhero costume without a cape? Our cape is attached to the shoulders of the jumpsuit with additional hook and loop fasteners. Fans of the Norse god will war-chant this officially licensed Thor costume!