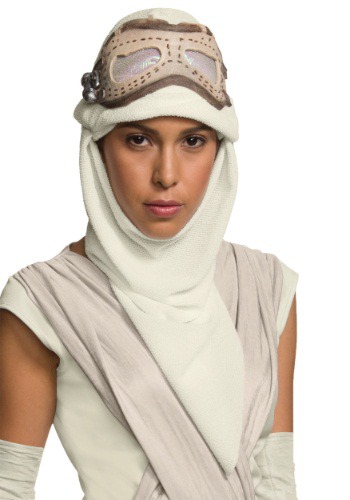 Life on Jakku was rough. The planet used to be a verdant paradise with forests and water, but some past calamity turned it into a sandy, windswept dump. It isn’t all bad, though. Jakku was the home of the Wheel Races, which we’re not entirely clear on but we’re at least certain they involved a wheel...and racing. The craggy terrain was home to a species of lichen which could be brewed into Knockback Nectar, an appealingly named drink which we suspect would make you go blind if not enjoyed in moderation. The rough life there was also good training for Rey, who honed her scavenging and warrior skills in the crucible of that inhospitable wasteland. That kind of lifestyle meant Rey got to wear some pretty cool accessories, including her signature hood eye mask for blocking out sand gales.

If you’re dressing up as the new hope of the galaxy, start your look of right with Rey’s trademark hood and eye mask. It will say you’re Force sensitive, but still hate getting sand in your eyes and hair. And as we all know about sand: “It’s coarse and rough and irritating and it gets everywhere.”