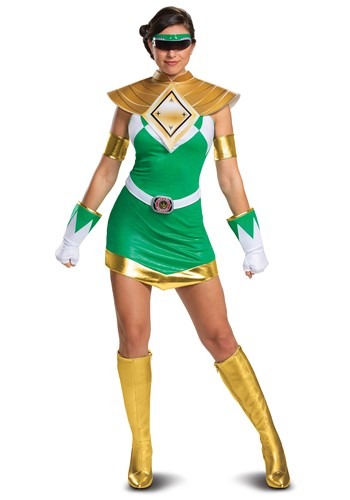 Growing up, we all had a favorite Mighty Morphin Power Ranger. Whether you loved the Red, Blue, Black, Pink, or Yellow Ranger, that all changed once Tommy Oliver came into the picture. That’s right, the once-notorious and eventually, beloved Green Ranger stole the show. He was powerful enough to take on all the original Rangers and he also had the coolest Zord, the Dragonzord!

This Halloween you can steal the show when you enter the costume parties in this Deluxe Green Ranger Costume. You may not be Jason David Frank, but frankly, we think this costume is awesome enough for anyone to bask in the limelight. Just keep an eye out for that awful Rita Repulsa. You don’t want to end up under her mind control again. She’ll make you do terrible things, like the Chicken Dance! The Green Ranger is cool and all, but it’s hard for anyone to bounce back from the embarrassment of the Chicken Dance.

Green Is Your Color

Start your mighty Morphin when you toss on the green dress. There is a white diamond pattern around the bust and a shimmering golden hemline. The belt attaches to the waist of the dress with hook & loop fastener, and the buckle has Tommy’s Zord symbol on it. Next, add the gold-colored foam shoulder armor. Then slide on the pair of golden armbands. The fingerless gloves will slip on with little to no resistance and match the color scheme of the dress. Finally, add the sleek green goggles. They may not offer as much protection as the Ranger’s typical helmet but they are way more stylish and offer you the chance to show off your awesome hairdo.

Move over Red Ranger, there’s a new leader in town. And it’s not Tommy Oliver. It’s a whole new Green Ranger. And this one is giving everyone the green light to party the night away.