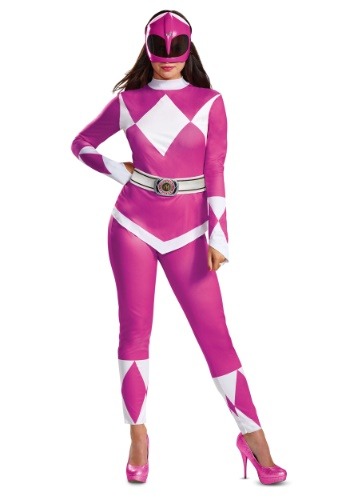 Are you ready to achieve your childhood dreams of becoming a Power Ranger? That life seemed pretty great, right? While it wasn't awesome that Angel Grove was always overrun by villains, the town always seemed to have pleasant weather and the Rangers always had friends. No wonder, all the Rangers were a part of something larger than themselves. Plus, what was the guinea pig you had as a kid compared to the pet Megazord's that the Rangers had at hand? To be fair, while Snuffles was useless at fighting bad guys, he was much better at cuddling than a robotic Pterodactyl. Part of you thought that someone might come to you when you were old enough to tell you about an elite team that you were destined to be a part of. While that didn't ever happen, we do have good news. Morphin' time is right around the corner and we won't even put you through a training montage!

Ready to put Rita Repulsa in her place? You'll feel like you're rearing to go when you slip on this Pink Power Ranger costume. The pink jumpsuit has the instantly recognizable diamond pattern that nineties kids know and love. The shirt portion is belted at the waist with a sparkly fabric and the Pink Ranger's Pterodactyl buckle. The sleeves reach past the wrist in a pointed shape that loops around your middle finger. Throw on the mask and you'll be ready for whatever bad guys head your way!

Once a Ranger, Always a Ranger

You were in Ranger mode when you were little and while you might have thought you were too big for that kind of thing now, we've got news. We want you on the team! Pair up with the other Rangers for a group costume that is guaranteed to go over well. You guys might be five little Rangers but these five Rangers are out to save Halloween from Ms. Repulsa's goblins!