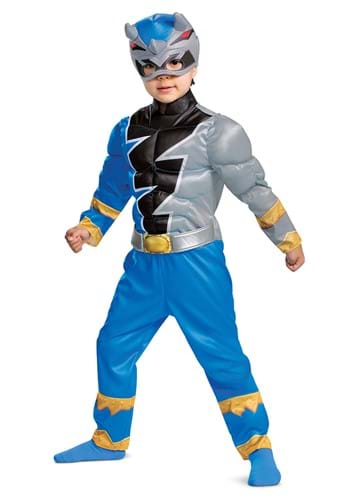 Every kid has a favorite Power Ranger. Some like the Red Ranger, because he's usually the leader. Others like the rebellious Ranger (in our day it was the Green Ranger). Us? We liked the Blue Ranger, because he was smart and always created neat gadgets! Well, Dino Fury's Blue Ranger is also a logical thinker type, even if he's not exactly the like some of the previous Blue Rangers. Now, your child can step into the role of the Blue Ranger with this Power Rangers Dino Fury Costume, which is officially licensed from the television series.

Inspired by Ollia Akana's outfit from the show, this Blue Ranger costume is a quick and easy way for your child to cosplay as the character. It comes with a blue and silver jumpsuit with a black design in the front. The belt is made out of foam and features a metallic gold buckle in the front. To finish off the outfit, the costume comes with a fabric mask, which has generous openings for the eyes. It fits with an elastic band in the back, ensuring a snug fit as your little one fights against the forces of evil.