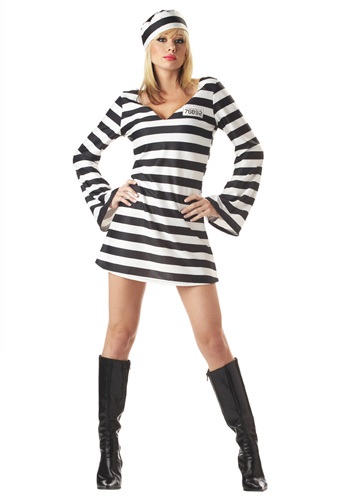 We just want to start by saying that, due to the fact that we have never been to prison, we have no actual experience. So, all of the advice we are about to offer you, while it makes sense in our head, is most certainly based on nothing other than bad intuition. But the way we see it, prison is probably just a lot like high school. There are clicks, friends, enemies, the "in" crowd and the "out" crowd.

So, the trick to being popular in prison is the same as in high school. Dress well! That's where this costume comes in. This prisoner outfit is the most stylish one on the market today, and wearing this on your first day of prison will have everyone asking "Hey, who's the new girl?". You'll have your own group of gal pals in just a couple hours thanks to this fashion statement.

This costume is the most stylish thing they'll let you wear on that side of the razor wire fence! You'll be wearing a simple dress with a v-neck neckline. The dress is covered in black and white stripes, which could be considered the original prisoner look. You'll even have your own prisoner number! It says "Department of corrections 76032" on the chest. The hat is the only accessory that they'll let you wear in there. It's a simple round hat made of the same striped polyester as the dress. All you will need are some styling prison boots and you'll be ready for your prison sentence!

If you find that your prisoner costume isn't making you many friends during your time behind bars, you could always try a different approach. Rather than worry about what's on the outside, focus on what's on the inside and be nice to people! We know it sounds crazy but it just might work!