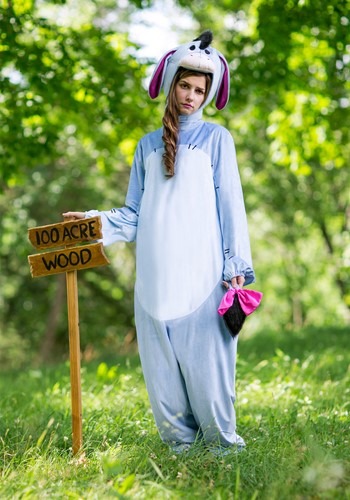 Gosh, Eeyore can never seem to catch a break, can he? Whenever he builds a new house of sticks, something always knocks it down. And he can never keep track of his tail, no matter how many times Winnie the Pooh and his friends help him track it down. It almost seems like the world is out to get him sometimes and he might be a little down in the dumps from time to time, but that never stops him from hanging out with his pals in the Hundred Acre Wood! He’s quite the hero, in his own sort of way!

Well, now you can be just like the character from the Winnie the Pooh series with this adult Eeyore costume. The officially licensed comes with a full-body jumpsuit that will have you feeling a little more like the classic Disney character. The jumpsuit is made out of a soft polyester velour material and it even has faux “stitch” marks around the belly. The tail is securely attached to the back, so you shouldn’t have to worry about losing it and it even has his signature pink bow attached to the end. It also comes with an adorable character hood that’s shaped like Eeyore’s head, so you’ll fit right in with the rest of the characters from the Hundred Acre Wood.

Also, be sure to check out our other Winnie the Pooh costumes, since it’s always so much friendlier with two!