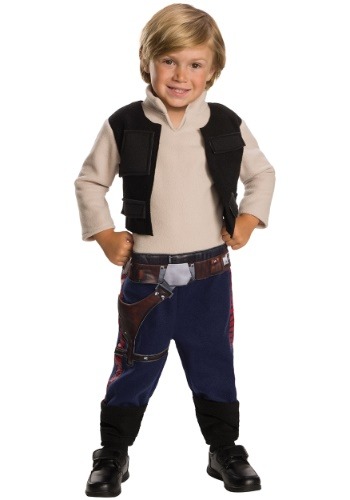 Never Tell Him the Odds

The possibility of successfully navigating an asteroid field is approximately 3,720 to 1. We're not sure what C-3PO is basing his numbers on, but those aren't great odds! Just don't tell your little one those numbers. For one, he probably won't really understand what they mean. But, he's also a young smuggler, like Han Solo, which means he doesn't need to be told the odds! He's ready to wing it. He's ready to fly in the face of danger and challenge the evil Galactic Empire.

Yes, your child is fixing to be the youngest smuggler in the Star Wars galaxy. All he needs is a little bit of swagger, a ship, and a dashing outfit. If you can hook your kid up with a Millennium Flacon of his home, then we can help you out with the outfit.

Now your child can become the sly hero from the Star Wars movies. This toddler Han Solo costume comes with everything you need to recreate the look for your child. The shirt portion of the jumpsuit has attached vest panels. The pants portion of the costume is dark blue with the Corellian Bloodstripe printed along the sides. It also has a printed belt and holster at the waist. Just get your little one into this outfit and he'll be ready to jump into the Millennium Falcon with his best pal Chewbacca.

Not Just for the Kids

If you're just as much of a fan of Star Wars as your little one, then you won't want to stop at just dressing your child up! You can find plenty of adult costumes to make a great Star Wars couples costume. Just pair up one of our adult Chewbacca, Luke, or Leia costumes to create a while family of Rebels!