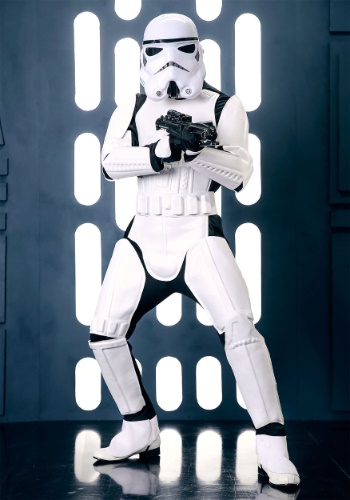 Stormtroopers get a bit of a bad rap. We're talking aside from working for a complete imperial tyranny, as foot soldiers they're usually put down and made fun of. Specifically because of their aim.

We would like to remind everyone that Darth Vader specifically asked that Princess Leia be taken alive, so of course their aim was terrible! They were trying to wound her, not kill her! Can you imagine the wrath of Darth Vader if they accidentally shot the princess he was after? Yeah. We would totally aim wide too.

So despite the bad rap, we think being a Stormtrooper would be pretty neat. You get that sweet white armor, not to mention blasters, access to Landspeeders, and a whole host of other cool vehicles, not to mention the just general tidiness and organization of the Empire. It's a pretty neat gig.

So, are you ready to join the Empire's finest? Well, even if you're not entirely convinced you want to side with the Empire, you can still get the cool armor at least. Our Stormtrooper Realistic Costume will make you look like you just walked out of a Star Wars movie... without needing to get shot at by members of the Rebel Alliance. It's comprised of a black polyester jumpsuit with white EVA foam armor pieces attached. This includes boot covers, a 2-piece padded helmet, and it's officially licensed. You'll feel like a pristine soldier of the Empire in no time! Only, be warned that the outfit does make it difficult to find the droids you're looking for...