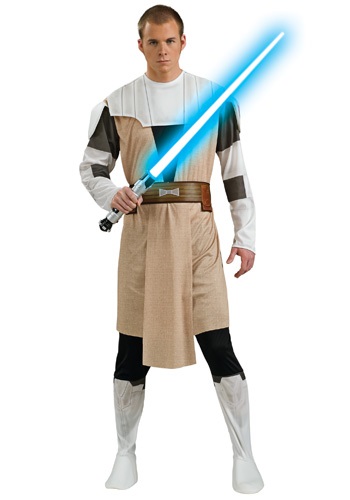 “You fought in the Clone Wars?”

“Yes. I was once a Jedi Knight, the same as your father.”

When Star Wars: A New Hope came out, that cryptic quote lit up a world of imagination. What were the Clone Wars? What sort of things did Obi-Wan do during that period of history? What role did he play with Luke Skywalker’s father?

Well, years later, we got to witness Obi-Wan’s greatness in the The Clone Wars animated series. He clashes sabers with Cad Bane. He protected the nobility of Mandalore. He battled Darth Maul and Savage Opress. He witnessed Qui-Gon Jinn’s Force ghost. Finally, he defeated Anakin Skywalker in a duel at its conclusion. That’s one heck of a resume! Now, you can become that version of the iconic Jedi Master with this Clone Wars Obi-Wan Kenobi costume.

Based on the hit cartoon series, this officially licensed adult Star Wars costume brings you the combat-ready look sported by Obi-Wan Kenobi. It comes with a tunic top that has attached armor pieces around the shoulders. It also has an attached belt in the front. The included pants have white bottoms, which look like the Clone Trooper boots.

Once you have it all on, you’ll be ready to take on any villain from the Separatist Army. Just make sure you practice your lightsaber skills and learn the important of the high ground before you go around picking fights with General Grievous or Darth Vader.